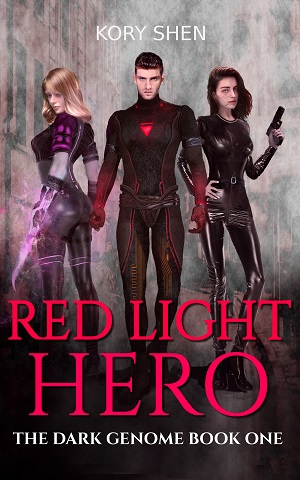 One night with a superpowered babe.

Alan Star thinks he’s the luckiest guy in the world, but fantasy turns into nightmare when a late-night meetup with a heroine turns deadly. To the dismay of the powers-in-charge, Alan has stumbled upon the dirty truth behind the squeaky-clean image of the hero business. Soon, everyone from government black ops to angry superpowered flames want to shut him up. Permanently.

With nowhere else to run, Alan escapes to the one place that the heroes won’t go: the underground world of a fabled hero-killer. For an indecent price, Alan gains the protection of a powerful crime syndicate. But he discovers too late that they want more than his good looks.

What will Alan become? Guinea pig? Ladykiller? Hero of the streets? His greatest weakness is the source of a newfound strength, as Alan forges his identity, teams up with heroes old and new, and faces the true menace behind it all.

Witness the birth of the Red Light Hero.